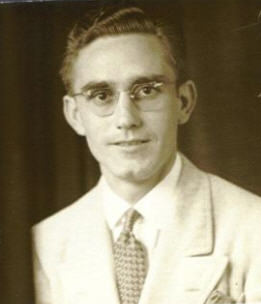 My great uncle, Arthur Shannon, was an aerial photographer in the United States Army Air Corps during World War II. On April 14, 1945 his plane crashed in the sea near Formosa (Taiwan). He was picked up by the United States Navy but died shortly thereafter as a result of injuries sustained in the crash. He was thirty-two.

A collection of his papers and his Purple Heart sit on a shelf in my office. A few dozen letters to his sisters, mother, a nephew, and his wife Regina; college admission letters, telegrams, clipped newspaper articles; a large scrapbook typical of the 1930s and 1940s, and a few photographs are all that remain to tell the story of his life.

He grew up with his parents and five siblings in a house near the corner of North Avenue and North Highland in Atlanta, Georgia. The family attended Druid Hills Baptist Church and Regina lived near by. According to one of his report cards, in 1928 he only missed one day of school at Bass Junior High School in Little Five Points.

A letter dated May 8, 1945, from the United States Secretary of War, addressed to Regina, reads as follows:

At the request of the President, I write to inform you that the Purple Heart has been awarded posthumously to your husband, Sergeant Charles A. Shannon, Air Corps, who sacrificed his life in the defense of his country.

Little that we can do or say will console you for the death of your loved one. We profoundly appreciate the greatness of your loss, for in a very real sense the loss is a loss shared by all of us. When the medal, which you will shortly receive, reaches you, I want you to know that with it goes my sincerest sympathy, and the hope that time and victory of our cause will finally lighten the burden of your grief.

Arthur’s marriage to Regina was short. They had known each other for years but didn’t marry until Arthur’s enlistment in the Army. They never lived together due to the war and had no children. Regina died in a car accident just a few months after Arthur’s military death benefits began to arrive. It’s ironic that they both died in a crash on opposite sides of the earth.

There is no heroic story to tell about his wartime experience. Just a citizen doing his duty. A son, brother, uncle, and husband whose life was cut short in defense of the republic. There was no ram in the thicket that day. No one to step in and take his place.

The cost of war is high. Did he die in vain? What would he say if he could answer the question? His voice has been silenced yet in my mind the gentle and clear answer is, no. The cost of tyranny is much higher.