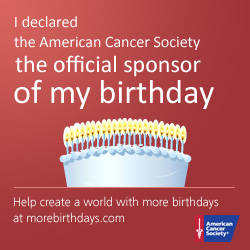 The American Cancer Society has branded its self, in part, as “The Official Sponsor of Birthdays.”  Here at the National Home Office in Atlanta, Georgia we’ve known this was coming since December 2008 and many of us have anxiously awaited this launch with sealed lips. A new website, morebirthdays.com, went live yesterday and a few new ads were uploaded to YouTube.

So what is all of this about? For some people birthdays are a struggle. I have a family member who has been celebrating her 39th birthday for at least 15 years. Despite the challenges of aging, as we morph into something far different than a twenty year old body, I hope we can all agree that birthdays are a good thing. A very good thing. A birthday means you’re here. This may appear trivial, it’s no revelation, and I’m not saying anything new. What is important to know is that there is an organization that exists to ensure that you and I and everyone else continue to live healthily lives year after year.

Our vision is a world free of cancer. I’ve never worked for an organization that is as focused and driven to fulfill its mission than the American Cancer Society. From the epidemiologist here in Atlanta to our National Cancer Information Center in Austin, Texas the commitment to help people stay well and get well, by finding cures and fighting back is at the heart of everything we do. The same can be said for the volunteers and employees I’ve worked with across the nation. Their commitment is tangible.

I have found no other organization with the resources, knowledge, and skill that can compare to the American Cancer Society in this field of work. As a fully entrenched social networker I’ve been please to see that the Society has kept up with the new media of a web 2.0 world.  We’ve integrated ourselves with Facebook, MySpace, LinkedIn, Twitter, YouTube, and Second Life and we will continue to reach out where ever people are to share our resources and our message of hope.

Our sister organization The American Cancer Society Cancer Action Network (ACS CAN) in Washington, D.C. has been successful working with lawmakers to fight against Big Tobacco in the United States. It was no coincidence that in his February 24, 2009 address to Congress President Obama called for health care reform to include a “new effort to conquer a disease that has touched the life of nearly every American by seeking a cure for cancer in our time” (April is National Cancer Control Month, by the way).

Nor is it a coincidence that a Bill was passed by the US House of Representatives granting the “Food and Drug Administration (FDA) authority to regulate the manufacturing, marketing and sale of tobacco products”. These things don’t happen without the voice and support of the people, and many organizations are coming together to ensure that our voice, your voice, is heard.

Living a life free of cancer is something for everyone to celebrate. Eleven million cancer survivors are celebrating birthdays because of our progress. Countless others have avoided cancer for the same reasons. As the old saying goes “knowledge is power.” Knowing how to get well and stay well is priceless.

So… Now that my lunch hour is coming to an end, it’s time for me to get back to work.